At Apple’s Peek Performance event, the Cupertino firm announced the update to the iPhone SE after months of speculation and rumors. The third-generation SE includes a significant boost in terms of performance while sporting the same design as its predecessors.

The SE’s old-fashioned design makes it one of the smallest iPhone on sale, alongside the iPhone 13 mini. Both models somehow target the same customer range who are looking for a small-screened iPhone with modern hardware under the hood. However, they are very different in many ways with the iPhone 13 mini having its upper hand thanks to its new design and attractive camera features.

There are a number of users out there who are currently stuck at a crossroads between the latest iPhone SE and iPhone 13 mini. If you are among those users, then we are here to help.

In this article, we will put the two models in a face-to-face competition to see how the 13 mini stacks up against the SE 2022.

Apple has always been mocked for selling expensive and overpriced smartphones on the market. However, believe me, you are paying for what you get in this case. In case,  Apple officially confirmed the pricing tiers for the latest iPhone SE at its event.

Starting at $499, you will be getting a A15 Bionic chip, 4GB of RAM, and 64 GB of internal storage. The 64GB option seems awkward given that most modern smartphones now come with 128GB of storage for the entry level. If you are prone to taking photos and videos, then pay an extra $50 for the 128GB variant, which is absolutely worth it. The most expensive model has 256GB of storage, priced at $579. 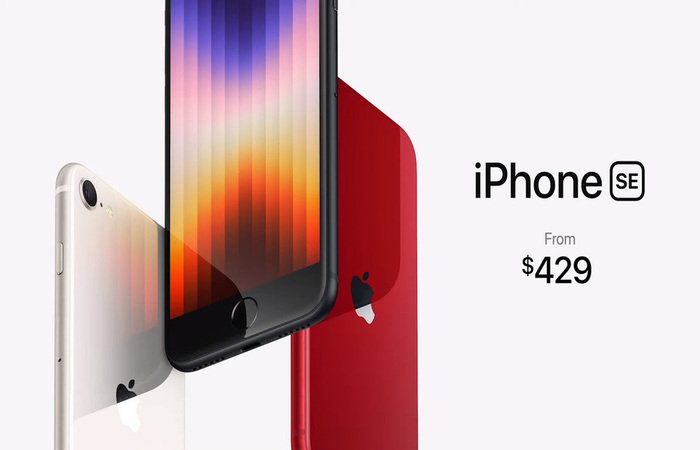 In brief, if the price is all that matters to you, then the SE 3 is without a doubt a better option.  However, you will be getting 64GB of usable storage space to begin with, which is not enough given that the top iPhone apps are nearly four times as big as they were five years ago.

The iPhone SE 2022 starts at a good price, but there are compromises. In fact, the latest SE is stuck in the same iPhone 8 shell as its predecessor, which means a thick-bezel design and a single camera lens on the rear. This is an obsolete look and camera setup in a world of edgeless design and quad-camera shooters.

On the front, the SE still has the old-fashioned home button with Touch ID support. To be honest, I am going to be very disappointed given that many budget Android phones out there like the Pixel 5a have much more appealing designs. In fact, Apple could have incorporated the fingerprint sensor into the power button like on the iPad Air.

However, the idea of sticking with the same design language allows for a cut-down price, which makes it a selling point of the SE 3. This adds up to the fact that the SE 3 targets people springing for the cheaper iPhones with powerful hardware. I do not think they will suffer from the SE’s old design as they prefer the latest features like 5G support and A15 Bionic chip.

With the iPhone 13 mini, Apple has taken some design hints from the classic iPhone 4. It has a squared-off look with flat-edge, aluminum sides. The 13 mini is undoubtedly more visually appealing, which is something I cannot say for the SE 2022.

In short, the iPhone SE 2022 has fallen behind in terms of smartphone design language. However, if you want something classic but powerful, then you are going for the SE despite its tired design. Most importantly, the SE 3 is a better model if you don’t want to cough up at least $270 for the entry-level iPhone 13 mini.

The iPhone 13 mini features a Super Retina XDR OLED display with a better pixel count and screen-to-body ratio. In other words, the 13 mini’s display has a resolution of 2,340 x 1,080 pixels compared to the SE’s 1,334 x 750-pixel screen.

The 13 mini outputs 788 nits of brightness and its display reproduce 83% of the DCI-P3 color gamut. Both phones feature a 60Hz refresh rate and lack 120HZ support like the iPhone 13 Pro and Pro Max.

In brief, if you heavily rely on your iPhones for entertainment needs like watching Netflix, Youtube, or Amazon Prime Video, then go for the 13 Mini.

Both devices are powered by the A15 Bionic chip under the hood. The new chip is a beast when it comes to handling tasks and playing games. However, the chip is a little bit excessive for users with basic needs – it’s the same case with the iPad Pro with the M1 chip.

I think there will be slight differences between the two models with the same chip. This is the case when comparing the Benchmarks results between the iPhone 13 mini and iPhone 13 Pro, which scored 1674 and 1697 respectively. Both are powered by the same A15 Bionic chip clocked at 3,2GHz.

The iPhone 13 mini scored 1671 in Geekbench single-core testing and 4465 in multi-core testing. There are not currently any benchmark results for the SE 2022, so we need to wait and see.

In short, both devices feature the same chip and you can expect the same performance. The 13 mini is super powerful and can handle all of the tasks you throw at it. There will be differences between the two with the SE 2022 slightly falling behind, but they will be very minimal.

The SE 2022 has a single 12MP shooter with an f/1.8 wide lens on the rear and a 7MP front-facing camera with an f/2.2 lens. Thanks to the new chip, the cameras on the SE 3 have been greatly improved compared to their predecessors.

Both devices have exciting features, such as Deep Fusion image processing, Smart HDR 4, and Photographic Styles. However, the 13 mini is still better when it comes to camera processing. It has a 12MP camera shooter with a larger f/1.6 aperture and Night Mode support.

There is an additional 12MP ultra-wide shooter, allowing you to get a wider field of view. Combined with support for HDR/Dolby Vision video recording and Cinematic Video mode, the iPhone 13 mini is a better option when it comes to camera shooting.

Mac Studio with M1 Ultra vs M1 Max: Is The M1 Ultra Worth It?