Apple MacBook is a complete package that does not change very often. Indeed, the 2019 MacBook Pro does not feature any external changes, sticking with the same design that was first introduced in 2016, but the new model has some under-the-hood improvements.

This year’s MacBook Pro uses an 8-core 9th-generation chip, allowing for superior performance. To be honest, the new chip is a beast when it comes to streaming videos and rendering videos, but it is not massive.

One thing I really do concern about the 2019 MacBook Pro is that it might suffer from thermal throttling issues. This seems fair as this year’s model has the same TDP as the 2018 model, which is famous for thermal throttling. With that in mind, I ran some tests to see if Apple has fixed thermal issues on its MacBook lineup. I also tested the model against Asus ROG SCAR III, which has similar specs.

I ran a test on all the three models using Prime95 under the same workload and the results surprised me. Thermals on the 2019 MacBook Pro looked better than the last year’s model. That’s 6 degrees cooler than the 2018 model, which hints that Apple has really fixed thermal throttling issues. Nope, it’s still early to come at a conclusion.

I decided to run another test. Under a full Prime95 Small FFT workload, the 2019 MacBook Pro sat consistently at 2.6 GHz, which is higher than the base clock and faster than both the last year’s model and the ASUS SCAR III. 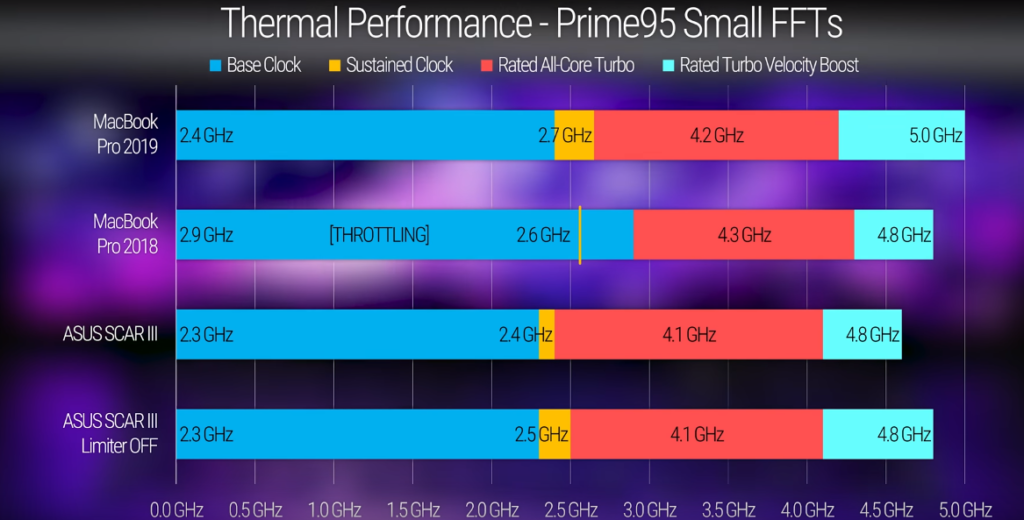 So, I now can confirm that the 2019 MacBook Pro with an 8-core 2.4GHz Intel Core i9 processor does not suffer from any thermal throttling issues. This may be the same case with the newly-announced Mac Pro, which uses three large impeller fans to dissipate heat at the same time. This hints that Apple might use a similar cooling system on its future MacBooks.

So, How did Apple fix thermal throttling on 2019 MacBook Pro?

Apple did not redesign the hardware inside the new model, instead, making two small changes that really did the trick. Firstly, they used a more effective thermal paste which allows for better heat dissipation. This is a slight change that you may not notice at first glance, but it really made a difference.

Secondly, Apple has undervolted the CPUs inside its MacBook Pro 2019, which helps to lower temperatures and enhance heat dissipation. To confirm my theory, I tried running Windows 10 using BootCamp and the MacBook Pro throttled way below its base clock under the heavy workload.

Running Windows 10 using BootCamp is only recommended if you want to play games on your Mac. However, you don’t buy a shiny MacBook for gaming as BootCamp performance is a lot lower than macOS.

In short, I am so glad that Apple really fixed thermal throttling issues on its MacBook Pro while maintaining a high-quality performance. With a new butterfly keyboard and cooler system, the 2019 MacBook Pro is a solid choice for any user out there.

Are you planning to grab the 2019 MacBook Pro? Let us know in the comments below.

Most common iOS 13 beta problems and how to fix them