Moving media such as music from a Mac computer to an Android device can be done in a number of ways. However, nearly every method has drawbacks that could be deal-breakers. For example, using Android File Transfer has been a common method for a long time, but I personally find it to be very user-unfriendly, with lots of errors including transfer issues and connectivity problems. And that’s with using the original USB cable that the Android device came with!

I have now come across one of the easiest ways to transfer my music from my 13″ MacBook Pro (mid-2012) running macOS Sierra to my Moto handset. I’ve done it several times, and I have yet to come across a major issue that prevented me from moving my tunes to my phone.

One of my main reasons for hunting for the perfect software for this is that I carry a lot of iTunes stuff on my Mac, as well as tons of downloads from various other sources. What I wanted was to find a tool that could help me get everything from there to my phone, which has the maximum expandable memory possible, by the way. What I found was iMusic. Here, I also showcase two other methods that you might like to try – Google Play Music and (Oh God, here it comes) Android File Transfer!

Let’s get started, shall we?

If you’ve never heard of it, iMusic is an emerging superstar in the world of media transfer that lets you easily transfer music from Mac to Android. Music transfer is just one of its many features, which include the ability to download songs from streaming sites absolutely free of cost. For the transfer part, it’s just one click to move your entire iTunes library to an Android phone or tablet. Even better, you can move music files between Android devices and even between iOS and Android.

iMusic works with all the latest Mac versions, and there’s also a Windows download if that’s what you’re after. It also works with really old Android devices running Android 2.1 all the way up to Android 9.0 Pie and its latest iterations. The interface is slick and very intuitive, and you’ll be up to speed in a couple of minutes after installing the software on your Mac.

Step 1: Download and install the application from the official website to your Mac. Connect your Android device using the original USB cable that came with it. You will need to enable USB debugging, and the instructions for this will be shown on the screen. In the software interface, you’ll see a “Device” tab at the top. Click on that, then click on “Transfer Music from iTunes to Device.”

Step 2: You should now be able to see the selection and transfer page. Simply select everything or just the playlists you want to transfer, and click the Transfer button. All you do now is select a destination folder on your device (I recommend the microSD because you don’t want to clog up your internal memory) and wait for the transfer to complete. 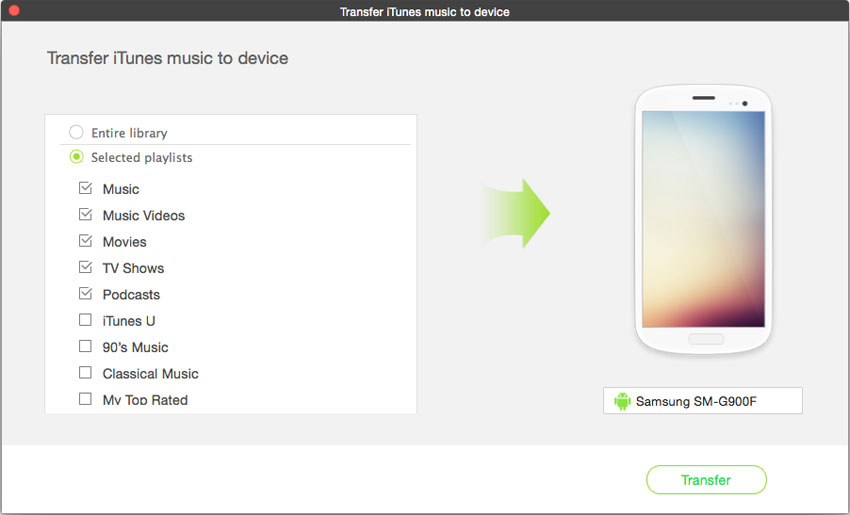 You won’t find a simpler way to do this accurately. With most other software, some songs won’t be exported, or you may come across errors during the transfer process. iMusic only does what it’s supposed to – nothing more, nothing less.

Use Google Play Music to Transfer Music from Mac to Android

Another useful utility is Google Play Music, which can be done without a cable. But that’s about the only advantage, and there are quite a few downsides to it. For example, if you’re in China, you won’t have access to most Google products. Another point of concern is data. Since it essentially involves uploading everything to your Google account and then downloading it back again to your Android device, you can imagine the amount of data it will eat up.

To use Google Play Music, go to the product page at this location. You need to be logged in to your Google account. On the top left, you’ll see three horizontal lines representing the expandable menu. Click on it and select “Upload Music” near the “Settings” option. You can now select all your music and other audio files and confirm the upload. Depending on your Internet connection speed, this could take a while. Once you’ve done this, go to Google Play Music on your Android device, select whatever you uploaded, and then download it to your microSD card (recommended.)

Android File Transfer to Move Music from Mac to Android

As I indicated in the beginning, this is probably my least favorite method. However, it’s been around for a while so it’s good to get familiar with this file transfer technique. Besides, the product is owned by Google, which is why it’s surprising that it has so many issues. However, the issues could be because of the cable, your Android device or even your Mac computer, so let’s not be too quick to blame the app itself.

Using Android File Transfer is fairly simple. You need to download the DMG file and install the app on your Mac. Next, unlock your Android device and plug it in. The USB connection should be set to “File Transfer.” Now launch the app, navigate to your local music folder, select what you want to transfer and drag the files directly into the relevant folder on your Android device. That’s about it unless you come across one of the many issues described above.

Our recommendation is to use iMusic because it’s more convenient and offers a one-click method to transfer music from Mac to Android. You can also convert the files into an Android-friendly format, but that’s only if required. Otherwise, just follow the instructions given above, and you’re good to go. If you want to learn more about iMusic and what it can do for you, feel free to visit the Aimersoft iMusic website at this location: https://imusic.aimersoft.com/

Apple WWDC preview: Everything we expect to see