Google is officially expanding its Google One VPN service to Mac and Windows following its iOS availability earlier this year. Google One is one of the most popular cloud storage services, allowing you to store and access files across all platforms.

Google One VPN is available through One VPN desktop apps for Windows and Mac computers. You can now take advantage of One’s VPN service to secure your internet connection, thus keeping you anonymous while browsing the web. This guide will show you how to use Google One VPN on Mac.

What is Google One VPN?

Google One VPN is part of Google One that adds an extra layer of protection to your online activity. Once the VPN is turned on, the app protects you from hackers when connecting to insecure networks, like public Wi-Fi. It also hides your IP address, meaning you are safe from any tracking activity.

How Much Does Google One VPN Cost?

The Google One VPN is only available to those who have subscribed to the Premium plan of Google One. The plan offers 2TB of cloud storage and is priced at $10 per month.

Is Google One VPN Different From Other VPN Services?

VPN by Google One behaves the same as popular services like Nord, Express, and Surfshark. The idea behind a VPN service is to offer the security and encryption needed to keep users safe while staying online.

Google One VPN has several limitations, including the fact that it won’t bypass geo-restrictions imposed by various apps, websites, and online services, like Netflix, HBO Max, or Hulu. Also, it does not feature a VPN server location list and only has one VPN protocol.

How to Use Google One VPN on Mac

To use Google One VPN on a Mac, you first need to sign up for a Google One account. If you already have one, let’s proceed with our step-by-step guide.

Step 1: Once you are signed into your Google One account, click on the Benefits tab on the left.

Step 3: Now select VPNbyGoogleOne.dmg to download and install the desktop app on Mac.

Note that if you are still waiting to see the Download button, wait for a few days, as the app is still rolling out to supported countries. 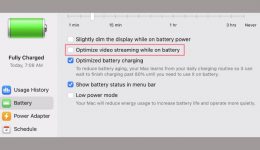 5 Tips to Secure Your Data If Your iPhone Is Stolen

How to Fix CoreServicesUIAgent Verifying Stuck on Mac