Please check our review for the new Mac Pro 2019 here

Apple just announced a refresh to its MacBook Pro with new 8th and 9th-gen Intel processors. Like any other MacBook Pro release, the 2019 models retain the same design that was introduced back in 2016, as Apple has only upgraded the hardware. However, the new machine has other upgrades that are worth your time.

Apple says that the maxed-out MacBook Pro (2019) is the fastest laptop it has ever released to the public. That seems plausible seeing that it features 8-core Intel Core i9 chip and up to 4TB SSD storage. I had the chance to test the machine and am happy to share with you our thoughts on the 2019 Apple MacBook Pro.

Buying a new Apple MacBook Pro is a big investment. Luckily, Apple retains the same pricing tiers for this year’s models. Indeed, the 15-inch MacBook Pro starts at $2,399 for the model with a Core i7 processor,  Radeon Pro 555X, 16GB RAM, and a 256GB SSD.

Apple continues to offer multiple custom configuration options for an additional price. The maxed-out model now costs up to $6,549. For that price, you will be getting an 8-core Intel Core i9, 32GB RAM, Radeon Pro Vega 20 GPU, and 4TB SSD storage. That’s a lot of money for a laptop and of course, you can buy a premium Windows-based laptop at a lower price.

Apple’s 15-inch MacBook Pro comes with an upgraded third-gen butterfly keyboard that offers improved build quality when compared to its predecessors. Basically, that’s the same technology we have already seen on the 2018 model, but Apple has changed the material used for the mechanism.

Apple says that the new keyboard addresses some issues like repeated characters, something MacBook owners have been experiencing recently. Personally, the keyboard on the 2019 MacBook Pro is pretty satisfying and great. However, I did not notice a huge difference and I don’t think the reason to upgrade your MacBook is the keyboard.

Apple also says that its Keyboard Service Program is now available to all MacBook machines with Butterfly Keyboard. Apple’s move acts as an apology for its keyboard failure.

Is an 8-core processor worth an upgrade?

You can configure your MacBook Pro with a 2.4GHz 8-core 9th-generation Core i9 with Turbo Boost up to 5GHz. Apple says that the new 8-core chip allows for two times faster performance than the 4-core CPU and 40 percent more speed than the 6-core model.

Indeed, the 8-core is a beast when it comes to editing and rendering photos in Photoshop and Final Cut Pro. I tried rendering a 4K raw video with Premiere Pro and it took around 10 seconds for the new model to complete the task, which is 30 percent faster than the 6-core MacBook Pro.

According to Apple, coders can expect 65% faster when coding in Xcode. Plus, some light games like Fortnite offer improved performance on the new MacBook.

In short, the 8-core chip adds a significant performance to Apple’s MacBook lineup. However, one question we get asked is “is it worth an upgrade?”. Well, that depends on your workload. If you are one of those who heavily rely on the MacBook for intense editing tasks, then it’s worth your money.

The Vega 20 GPU is still there

Apple continues to offer a higher-end AMD Radeon Pro Vega 20 graphics card option on this year’s MacBook Pro. In reality, the Vega 20 really makes a difference when it comes to gaming and editing videos. 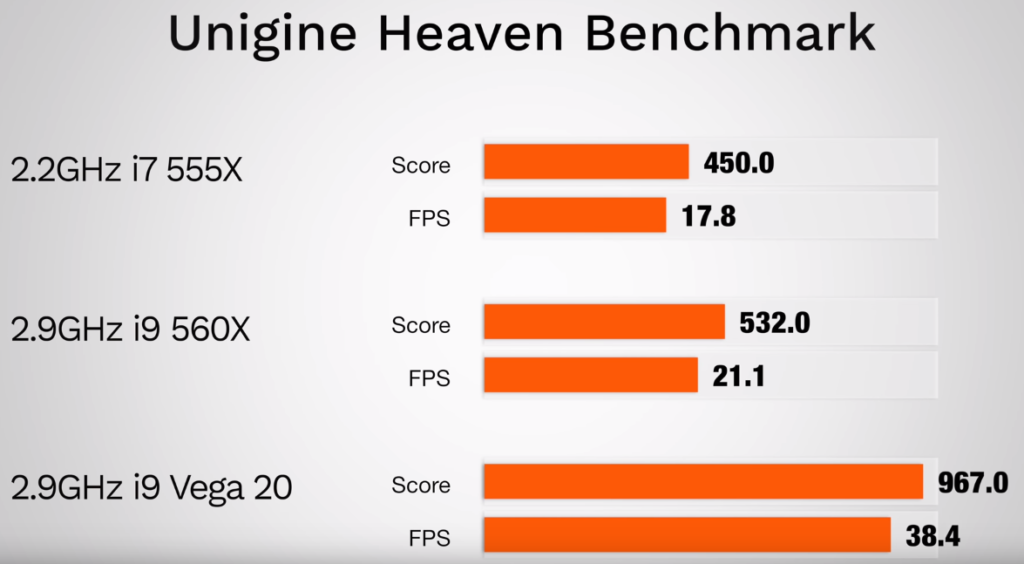 I ran a test with Unigine Heaven, a benchmark that uses both the processor and graphics for the test and the results were not surprising. The Core i9 Vega 20 MacBook Pro showed its dominance over the 560X and 555X.

When it comes to gaming, the Vega 20 really stood out. However, there is no huge fps difference between the 2019 model and the last year’s machine. For the Vega 20 gaming test, you can check out our article here.

In reality, the 8-core chip only made a small boost during our test. Some CPU-intensive games like Battlefield 5 ran smoothly at all times with a consistently high frame rate and no lags. However, one major drawback is that you still need to install Windows 10 using BootCamp on your Mac to get better performance.

The new MacBook Pro is finally here after months of rumors. The new machine has the same look while adding a small upgrade under the hood. It appears that Apple is rushing with the release of the new MacBook Pro. If you now have a 2018 MacBook Pro, then I think there is no reason to upgrade.

Don’t forget to share with us your thoughts on the new Apple MacBook Pro.

How to Back up MacBook Pro to an External Hard Drive